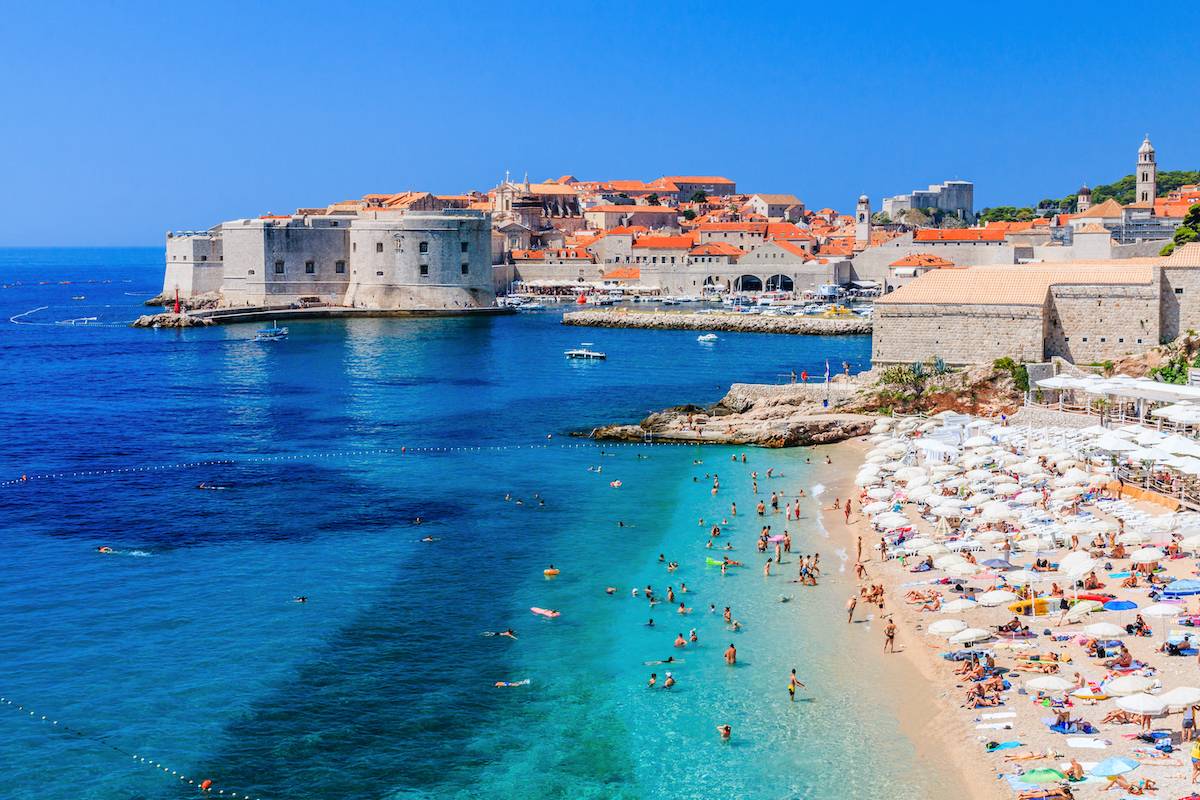 The walled city of Dubrovnik is one of southern Europe’s most spectacular sites. It straddles a rocky promontory on the coast of the Adriatic Sea, like a Disney castle straight out of a fairy tale. Its historic center is one of the best-preserved examples of a fortified urban settlement from medieval times, which makes it a UNESCO World Heritage site. Dubrovnik is also home to one of Croatia’s finest hotels – Hotel Excelente, which sits right above the old town and offers unrivaled views. It is also a popular tourist destination, so that you will find plenty of people around during the day, especially on the weekends.

The city is also famous for its old architecture, which is a result of its long history. You can see a lot of different styles of architecture throughout Dubrovnik, from early Byzantine churches to Gothic and Renaissance buildings. Dubrovnik’s Old Town is also one of Croatia’s most visited places, so you must be prepared for crowds. Its fantastic natural setting and impressive architecture make it an ideal place to relax and take things slowly for a few days.

Today Dubrovnik is one of the top tourist destinations in Croatia and one of the world’s most beautiful cities. Located on the coast of southern Croatia on the Adriatic Sea, plenty of hotels and hostels are available if you plan to visit this fantastic city. Its architecture, natural setting, and proximity to other locations make it a perfect base for exploring other attractions. If you are looking for things to do in Dubrovnik, this article is for you. It covers some of the best things to do in the city and nearby, allowing you to discover all these idyllic location offers. Here are our top 10 things to do in Dubrovnik:

Dubrovnik is famous for its medieval city walls and towers. The city walls are 5 km long and made of limestone, giving them their distinctive color. The walls were built to protect the city from invaders, and they are one of the most recognizable symbols of Dubrovnik. They also make a great walking route around the city. If you want to walk along the walls, a path follows their entire length, passing numerous colorful buildings and old churches.

The main tour starts at Stari Grad (Old Town) in the center of town and ends at Ploče Gate. You can choose from several other paths through the walls too. These walls are also open to the public so that you can explore them independently. The main tour takes about 3 hours to complete, but shorter routes take about an hour each if you want to see more than just the wall walkers’ highlights.

The Old Town is the historic part of Dubrovnik. It developed between the 12th and 17th centuries as trade thrived in Dubrovnik, and it is still inhabited today. It has been declared a UNESCO World Heritage Site, an important place to visit. The Old Town is divided into two parts, Upper Town and Lower Town, which are connected by a bridge.

There are several museums and churches in the Old Town, as well as numerous restaurants, bars, and shops. Suppose you want to see some of the more famous sights in the Old Town. In that case, we recommend going to the Church of St. Blaise (Sv. Vlaha), Church of St. Nicholas (Sv. Nikole), Church of St. Anthony (Sv. Antun), and Diocletian’s Palace (Katedrala Svetog Duha). A walk through this old town will take you back in time, and it’s an excellent way to get to see some of the old buildings and streets of Dubrovnik.

Dubrovnik Cable Car, the best way to get around the Old Town of Dubrovnik is by cable car. This cable car system, built in the late 19th century, is one of the highest systems in Europe and one of the most beautiful. It takes you up to Mount Srdj, where you can walk along a path that runs along the top and admires views of the Old Town and surrounding area while enjoying a drink at one of the many cafes and restaurants.

A one-way ticket is the best way to go, as it is cheaper than a return ticket. Enjoying a return tour using the cable car is also a good idea, as it allows you to see the entire Old Town from above. The cable car is operated by the City Tourist Office and has a ticket office next to it. Tickets are available at their office, or you can purchase them online. The cable car is one of the things to do in Dubrovnik, so don’t miss it.

The Jesuit Staircase is a popular attraction in Dubrovnik, located in town. It is one of the city’s most famous places to visit, and it is a must-see for tourists. It is a beautiful stairway that leads up to the Old Town wall, and it is an excellent place to walk while taking in the beautiful views. When I was there, I took the stairs up and ended up on a different side of the wall. There are ten stairs, and each flight is about 15 minutes long.

The place is trendy, so the tours to the Jesuit Staircase will fill up fast. The stairway is made of several different colored marble steps and has a beautiful design on the walls. The stairs are around 210 meters long, and they are pretty steep. The best way to enjoy this place is by taking a guided tour. You will also be able to see other parts of Dubrovnik during your tour and learn interesting facts about this city and its history.

The Lovrijenac Fort is located on the northern side of the city. It was built in the 11th century and is a stunning example of Venetian architecture. The views from the top are exceptional, and you can see St. Nicholas’ Cathedral and Dubrovnik’s Old Town in one view. The fort can be reached by crossing a short bridge from the Old Town, about a ten-minute walk away.

The fort has two underground levels: one for defensive purposes and one for living quarters, and some other rooms used for storage purposes. The upper level also has a small chapel, which was used by pilgrims who came to Lovrijenac to pray before they entered Istria from Dalmatia via the city of Crikvenica. If you are interested in the fort, you should visit during the summer months of June to August when Dubrovnik’s Old Town is full of tourists.

The Trsteno Arboretum is located on the southern side of Dubrovnik and has a nice walk around it. The arboretum has over 400 different types of trees, bushes, and flowers. The place also has a small visitor center where you can see some historical artifacts from the city.

If you are looking for a relaxing spot to spend some time, this is one of the best places to visit in Dubrovnik. You can sit and relax in the shade, go for a walk through it, or even go for a swim in its beautiful lake. If you want to get there by public transport, take bus number 9 from the bus station, Strossmayer Square (Stari Grad), and get off at “Trsteno.” Two mini-buses will take you to Trsteno Arboretum, which leaves from Zagrebacka (Zagrebška) street. The place is enjoyable for the locals and tourists, so it is a lovely spot to visit on a sunny day.

The Franciscan Monastery (Franciscanska Kapela) is situated on a hill overlooking the Old Town. It was built in the 14th century and is one of the most important religious buildings in the city. Its location makes it an ideal place for bird watching, with numerous species of birds inhabiting its grounds. The monastery also has an impressive collection of old paintings, including some by Perugino and Dürer.

This church is located in the Old Town and is one of the oldest in the city. It was built in the 12th century and is a unique example of Romanesque architecture. It has an exciting history, as it was built on top of a Roman Catholic Church dedicated to St. Blaise, a 4th-century bishop from Syria. The original building was demolished and replaced with this Romanesque structure sometime during the 13th-14th centuries.

This beautiful church is a must-see while you are in Dubrovnik. It has a beautiful Romanesque interior and is a great example of the structure and style of the period. There are many valuable works of art inside, including a large painting on the ceiling of Jesus descending into Hell. The church also houses an impressive collection of relics, historical artifacts, and interesting frescoes. The church tour is very interesting, and you can learn a lot about the history of Dubrovnik and the town.

This 16th-century palace is located on one of the city’s main streets, Sponza Street. With a small but beautiful garden and a long history, the palace has been abandoned for years and needs restoration since it was damaged by an earthquake in 1667.

These days, the palace’s garden is open to the public, and visitors can look at the palace from which it takes its name. The main building of this palace is now used as a tourist information center so visitors can learn more about Dubrovnik and its history.

The Sponza Palace is also known for its unique tower, the only one in the world. The tower was built on the orders of Francesco Maria II d’Este, and it is now used as a museum.

Dubrovnik has several beautiful beaches to choose from. Some of these beaches are sandy, and some have pebbles. Most beaches are crowded with tourists, so you can expect to pay a small fee to enter. If you would rather avoid crowds, try to visit the beaches that are located in the city itself. These include Romania Beach and Kneza Mislava Beach. The beaches attract many tourists, and you can rent a beach chair or umbrella.

Swimming at beaches is also good as the water is clear and clean. Lapad beach is located in Lapad, surrounded by old stone walls. The beach is perfect for those who want a secluded beach. One of the best beaches in Dubrovnik is Dubrovnik Beach, which is located in the city center. It is a popular beach for tourists and locals alike and is well-constructed and clean.

Dubrovnik is a beautiful place to visit and a popular destination for many tourists. It has many attractions, numerous beaches, and a lot of historical sites. The city also has great nightlife, making it an ideal place for those looking for a party.

If you are looking for an amazing vacation experience that will last for months, then Dubrovnik should be your first choice. It is a beautiful city with a rich history and interesting attractions. The city is beautiful, and the people are friendly. In addition to the beautiful beaches, you will also love the many places of interest in Dubrovnik. You will be amazed by the beauty of Dubrovnik, and you will love your stay in this amazing city.

The amazing city has stunning architecture, wonderful restaurants, and a lot of interesting places. The best thing about Dubrovnik is that it is not overcrowded, and you can easily find the right place to enjoy your vacation. The city has many activities for the entire family, so that everyone will have a great time here. You will love the city and come back again and again.