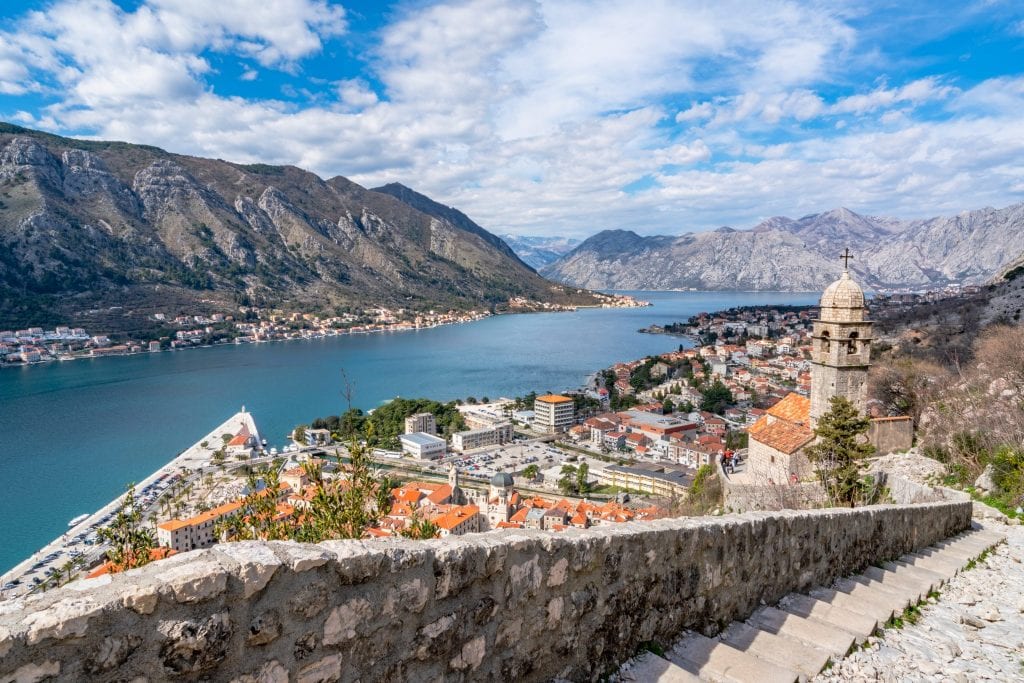 Kotor, a medieval fortified ancient town, is situated in a picture-perfect fjord-like bay, with the limestone rock of Mount Lovcen rising majestically in the background. It is a UNESCO World Heritage Site and a major tourist destination in the young Balkan republic of Montenegro in Southeastern Europe. Stari Grad, Kotor’s Old Town, is undeniably a tourist mecca, yet few people can stay away from its allure once there.

This city on Montenegro’s Adriatic Coast has everything a traveler could want: winding cobblestone streets, lively squares with a thriving café culture, well-preserved city walls you can walk on, ancient fortifications, churches aplenty, and more.

Most cruise ship passengers only spend the afternoon at Kotor, but those free to explore on their own will want to spend at least a few nights there to enjoy everything it offers. If you don’t have much time, we highly recommend skipping all that, heading straight to the city walls, and climbing the steps to the very top of town for breathtaking views.

The historic district of Kotor is one of its most significant selling points. The neighborhood is a labyrinth of alleys and secluded courtyards formed by white stone walls, passageways, and staircases.

The Venetians’ Old Town is so impressive and significant that it was named a World Heritage Site by UNESCO in 1979. Getting lost in this place is like taking a time machine to another era.

Most visitors arrive by the Sea Gate, immediately struck by the beauty of Kotor’s historic buildings and gleaming cobblestone streets. To make the most of your stay, sign up for a walking tour that visits the city’s top attractions. This private 90-minute walking tour is more in-depth and costs the same as the group trip, which lasts an hour.

The Church of Saint Nicholas was constructed between 1902 and 1909, despite its Byzantine architecture giving it an appearance of antiquity. After a church from 1810 was destroyed by fire, it was erected there in 1896. A monastery from the 16th century once stood there.

There are two enormous bell towers on either side of the building; both topped with black domes. Russia presented these gold crosses for use atop the domes.

An abundance of exquisite silver candlesticks and chandeliers decorate the church’s interior. Frantisek Ziegler, a Czech artist, created the iconostasis in 1908.

Despite these additions, the church is still quite plain, as is traditional in Orthodox buildings. The simple stained glass panels cast a soothing and mystical glow on the otherwise stark grey walls.

Trip to the Kotor Fortress by Hiking

Hiking up to Saint John’s Fortress, also known as the Castle of San Giovanni, is one of the best things to do Kotor. The Old City Walls, which can be found along the 1355-step ascent to the hillside above the Old Town, offer breathtaking panoramas over the Bay of Kotor. About an hour and a half into the journey, you’ll pass the Church of Our Lady of Remedy, which may be seen in the photograph below.

The ascent takes only 45 minutes, but the descent is exhausting, taking about an hour and a half. With all the photo chances and time spent atop, the average visitor spends at least two hours. Hike in the morning if you can, so you don’t have to take shots into the sun.

The City Walls of Kotor has a perimeter of around 4.5 kilometers; its breadth ranges from two meters to sixteen meters, while its height ranges from twenty to thirty meters. The walls, built in the 9th century, have certain sections that give the impression that they are falling apart but are actually in surprisingly good order overall.

The exceptional state of preservation that the city gates of Kotor have achieved is truly astounding. Upon entering through the River Gate, you will be required to make a payment. As you make your way up more than a thousand flights of stone steps to a vantage point overlooking the bay, you will be given a pamphlet that describes the highlights of the walk you are about to embark on.

About a third of the way up the ramparts is where you’ll see Our Lady of Health, one of the more noteworthy landmarks along the path. The church was built in the 15th century and is credited with curing plague victims. You can also turn around here if you feel like you need to continue the ascent.

The Kotor Cats Museum is dedicated to the feline citizens of the city of Kotor, as one might expect from the museum’s moniker. The majority of the museum is made up of a collection of artworks and artifacts that are all in some way related to cats, and a portion of the museum’s relatively low admission fee is given to charities that help the city’s homeless cats.

When you reach Kotor, one item that is sure to stand out to you is the city’s enormous population of cats, which is something that you will notice almost immediately. They can be seen lounging in the sunshine, allowing themselves to be caressed by pedestrians, and searching for food on the patios of restaurants all over the place.

It would appear that both the inhabitants and the visitors to the area have a soft spot for the cats, as seen by the numerous bowls and piles of cat food that can be found strewn about the area. At least in compared to the well-being of other strays, the cats appear to have received adequate care.

The heart of Kotor’s historic quarter is comprised of a number of picture-perfect squares that have been outfitted with al fresco dining places. This might be one of the best things to do in Kotor. Dishes that are boring and prefabricated are often what can be seen on the menus of these restaurants, which feed the masses of tourists getting off cruise ships.

In the Old City of Kotor, there is a broad selection of restaurants that cater to tourists. Many of these restaurants have nice patios that look out over the numerous plazas and alleys that are located throughout the city. On the menus that feature Italian and Montenegrin cuisine, seafood is typically prepared in a prominent role.

If you have your heart set on eating in a public square, the restaurant of the Astoria Boutique Hotel Kotor, which features a patio that is open to the elements, comes highly recommended. The restaurant’s pasta and meats are superb, and the cocktails are distinctive. At any time, you can count on receiving prompt assistance from an expert.

The construction of the impressive entryway began in 1555, while the Venetians still controlled the city (1420–1797). It is crucial to keep an eye out for the winged lion of St. Mark, which serves as the city’s symbol and may be found not only here but all across Venice. Above the entryway are a communist star and a phrase from Tito that serve as a memorial to the day that the city was liberated from the control of the Nazis. Both of these elements can be seen together. There is a giant chair that is mysteriously placed just at the entrance, and it offers some fantastic opportunities for photographs.

There are several statues of saints on display, including a Madonna and Child from the 15th century that also includes Saints Tryphon and Bernard, as well as other statues of saints. Curiously, the height of the gate has decreased by more than 70 centimeters as a direct result of the large stone blocks used in its construction.

Beginning your trek to Tvrave Kotora, better known as the Castle of St. John in Montenegro, with a stroll through Kotor’s Stari Grad, can help you get in the proper frame of mind. When viewed from above, the Old Town of Kotor in Montenegro and the fjord will look breathtaking. This is among the highly recommended things to do in Kotor.

The Byzantines and the Venetians are just two of the numerous empires that contributed to the development of these enormous old fortress walls, which date back to the Middle Ages. These walls date back to when they were first built in the Middle Ages. When gazing out from any of the city gates, it is pronounced that the walls, which may appear to be in disrepair from some angles, are actually in astonishingly good form. This is the case even though they may appear neglect from specific perspectives.

Swim through the Blue Cave

The shoreline of the Bay of Kotor is known to be breathtaking, but the most enjoyable way to take in its gorgeous caves and beaches is from the perspective of a boat. Enjoy the best that the bay offers on this boat tour that travels around the coast and stops at notable attractions like the Blue Cave. It has an incredible depth of color and is entirely transparent.

You won’t have to contend with a dozen other tour boats if you go to these incredible sea caverns since you’ll have them all to yourself, thanks to this fortunate circumstance, which is a boon for adventurous tourists.

Both the Blue Cave in Croatia and the Blue Cave in Montenegro receive their names from the stunning blue hue that emanates from within. This is caused by the sun’s rays bouncing off the waters, which light up the cavern’s interior. This natural phenomenon is fascinating to look at from a distance, but it is even more incredible to see firsthand.

Additionally, the entrance to the cave is relatively tiny and can only be reached by using very small boats. Timing the tide is another critical consideration because it is quite difficult to enter some areas during high tide.

Our Lady of the Rocks

A chapel built in 1722 and dedicated to Our Lady of the Rocks may be found on an artificial island in the inner portion of the Bay of Kotor, not far from the old town of Perast. The church is named after the patron saint of the rocks. Two fishermen are said to have discovered an image of the Virgin Mary carved into a rock formation that would later become the island in July 1452. The rock structure was the precursor to the island. In the area where the icon was discovered, a modest Orthodox church was built to memorialize it.

When the Venetians acquired control of the region in 1630, one of the first things they did was build a Catholic chapel in place of the Orthodox one there. In addition to that, they turned the pile of boulders into a natural island. The original icon of the Virgin Mary, which dated back to the 15th century and was discovered on the island, is still housed in the church. In addition, there is a museum and a gift shop available.

It is possible to reach the island of Our Lady of the Rocks by taking a ferry from Perast, which is approximately a half-hour bus ride from Kotor.